BOOK REVIEW: "Individutopia", a Modern Classic in the Making 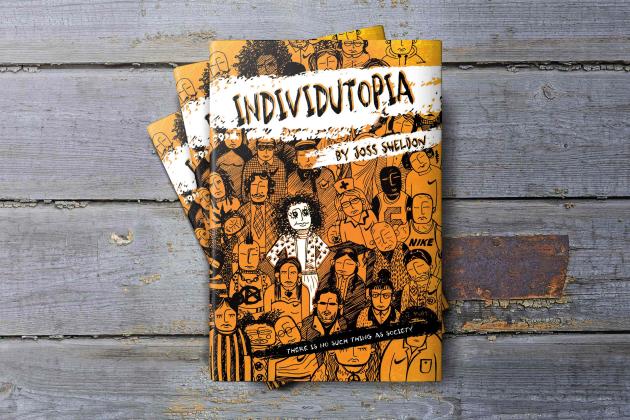 Dystopian and post-apocalyptic novels have stood the test of time, and continue to be popular amongst younger and older readers alike. From classics such as 1984 and Brave New World, to modern hits like The Hunger Games and The Maze Runner, this genre of books has been a massive success because it taps into peoples imagination and curiosity about what the future may hold for humanity.

Individutopia by Joss Sheldon is no exception. Its set in the year 2084, in London, during a time where society as we know it no longer exists. Everyone only cares for themselves, and the words us, we, they and you have fallen out of common usage. Due to advancements in technology, the privatization of everything, and the rise of monopolies, people are completely isolated and forced to fend for themselves. They are suffering from a range of mental illnesses and are reliant on antidepressants, which are mixed in with the air.

This theme is similar to the use of Soma in Brave New World. But theres one big difference. In that novel, the government forced Soma on its citizens from an early age. In this story, however, there is no such government. People choose to take antidepressants. Theyve become their own big government, theyre own Big Brother; forcing themselves to work hard; dreaming of earning more money, repaying their debt, buying a home and retiring.

This is what makes Individutopia stand out. Unlike dystopian novels of the past, inspired by big communist states, it is not the government that imprisons people with force, but the individual who imprisons themselves through debt and irrational hope.

Individutopia is unique in this regard, and its incredibly relevant to the world around us today; painting a doomsday scenario which could easily come about if we do not free ourselves from our addiction to social media, leave our homes and socialize with other people.

Time will tell if Sheldons prophecies come to pass. The novel will do well to predict the future as well as novels such as 1984. But one thing is for certain, even now. This rebellious author has spun an exciting tale, filled with twists and turns that will make you want to finish this book in a single sitting. The plot is as well-formed, short and snappy, as any of the great works which have come before it. It really is a modern classic in the making.

If you enjoyed Brave New World or The Handmaids Tale, youre going to adore Individutopia.

Some 8.7 million Texans remain under orders to boil their water before drinking or cooking with it, following a massive ...

SYDNEY, NSW, Australia - Stocks in Asia rose across the board on Thursday, in line with the global trend, following ...

Musk's loss of $30 billion drops him from world's richest person

Tesla founder Elon Musk is no longer the richest person on earth after his stock portfolio tumbled 6 percent on ...

NEW YORK, New York - U.S. stocks closed sharply higher on Wednesday adding to the volatility this week which has ...