Injuries continue to consume Raptors as they host Nets 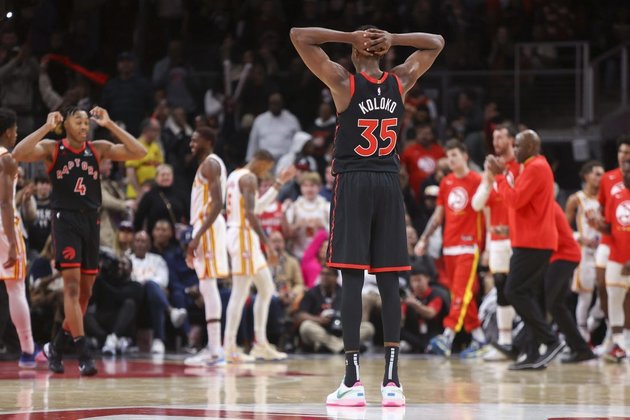 The Toronto Raptors will attempt to overcome a handful of injuries, with one of those potentially being Scottie Barnes' sprained left knee, when they clash with the visiting Brooklyn Nets on Wednesday night.

Barnes did not practice on Tuesday and is considered day-to-day.

The Raptors have notplayed since Saturday, when they lost 124-122 in overtime to the host Atlanta Hawks. Barnes had 28 points, 11 rebounds and nine assists in that game.

Toronto is not sure when Barnes' injury occurred, but it does not believe that it is serious

The timing is bad, however.

"With all the guys out, we've just got to go night to night right now," Nurse said. "We're just trying to survive the next game."

Gary Trent Jr. (hip and illness) and Chris Boucher (illness) are expected to return on Wednesday.

The Raptors have split eight games since Siakam was injured during a loss to the Dallas Mavericks on Nov 4.

"Not having Pascal is one thing, but the other numerous guys out was probably another," Nurse said. "I'd say when you look at it in totality, 4-4 with all the bodies that are out is probably OK."

Although they are shorthanded, the Raptors will now try to take advantage of the Nets, who will be playing the second game of a back-to-back after a 115-106 road loss to the Philadelphia 76ers on Tuesday.

Kyrie Irving scored 23 points for the Nets and Kevin Durant added 20. Ben Simmons, a former 76er, had 11 points, seven rebounds and 11 assists and was showered with boos in his return to Philadelphia.

Former Raptor Yuta Watanabe, now with the Nets, leads the NBA in 3-point shooting percentage among qualified players at 57.1 percent (24 of 42).

Watanabe (right hamstring strain) did not play Tuesday after combining for 36 points and 9-for-13 shooting from deep over the previous two games.

With Durant drawing attention and Simmons pushing the tempo, Watanabe has made the most of the clear looks that come as a result.

"Yeah, my shots are easy because of KD, Ben, those guys pushing the ball, giving me great passes," Watanabe told The New York Post. "So I've got to appreciate them for giving me great passes. And my job is just to make those open shots. So, I'm going to just keep shooting with confidence. I know I can do that."

Durant has a lot of faith in Watanabe, too.

"He's playing great," Durant said. "We love his energy. He's hitting big shots for us. So you always get excited for your teammates, especially guys who come in and don't necessarily have a guaranteed spot on the team but work their way into the rotation and put their imprint on the game from Day 1."

MOSCOW, Russia: Russian officials have said that some 2,500 Caspian seals have been found dead on the Caspian Sea coast ...

Indonesia to outlaw sex outside marriage

JAKARTA, Indonesia: In a legal overhaul that critics say could curb freedoms and police morality in the world's third-largest democracy, ...

Hawaii braces for eruption on Big Island of Honolulu

HONOLULU, Hawaii: Officials are concerned that a major eruption of the Mauna Loa volcano on the Big Island of Hawaii ...

BUENOS AIRES, Argentina: A massive wave struck the Viking Polaris cruise ship this week as it was sailing toward the ...

After years of upheaval, US judge throws out Huawei fraud indictments

NEW YORK City, New York: Last week, a U.S. judge has dismissed an indictment against the chief financial officer of ...

NEW YORK, New York - U.S. stocks were bought up on Thursday, with all the major indices finishing with appreciable ...

WELLINGTON, New Zealand: The government of New Zealand said it will introduce a law requiring major online digital companies, such ...

China to sell electric vehicles in Japan in 2023

Change comes to US auto union as reformers win elections

NEW YORK, New York - Stocks in the U.S. and around the world fell on Wednesday although losses were mostly ...

Hearing aids now sold without prescriptions in US

WASHINGTON D.C.: Hearing aids can now be sold without prescriptions from a doctor in the U.S., making it easier and ...