Angels pour it on early to complete sweep of Rangers 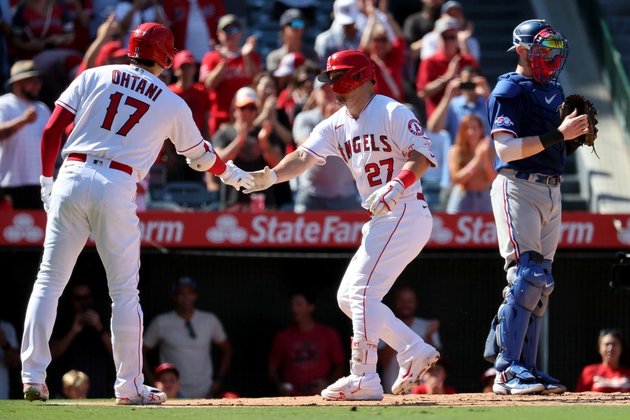 The win finished off a three-game sweep of the Rangers and completed the Angels' home schedule for the season. The seven-game winning streak is the Angels' longest of the season.

The Angels had 14 hits in all, including three apiece from Soto, Mike Trout and Taylor Ward. Trout hit his 39th home run of the season in the fourth inning and Shohei Ohtani extended his career-best hitting streak to 17 games with a first-inning single.

Angels starter Tucker Davidson gave up three runs and three hits, but struggled with his control, walking five and lasting just 4 1/3 innings. Jaime Barria (3-3), one of four Angels relievers, got the victory over Rangers starter Tyson Miller (1-2), who gave up seven runs on nine hits and three walks in four innings.

The Angels jumped on Miller immediately after Luis Rengifo struck out to begin the bottom of the first inning. The next six Angels hitters all reached base, starting with an infield single by Trout.

Ohtani followed with his single, and Ward singled to score Trout and move Ohtani to third. Matt Thaiss walked to load the bases before Logan O'Hoppe also walked, driving in a run and putting the Angels up 2-0.

One out later, David Fletcher's two-run single put the Angels ahead 6-0.

The Rangers scored all three of their runs in the fifth. Corey Seager hit a two-run homer, and Nathaniel Lowe walked, went to third on a double by Adolis Garcia and scored on a groundout by Josh Jung.

Jo Adell's RBI single for the Angels capped the scoring in the seventh.