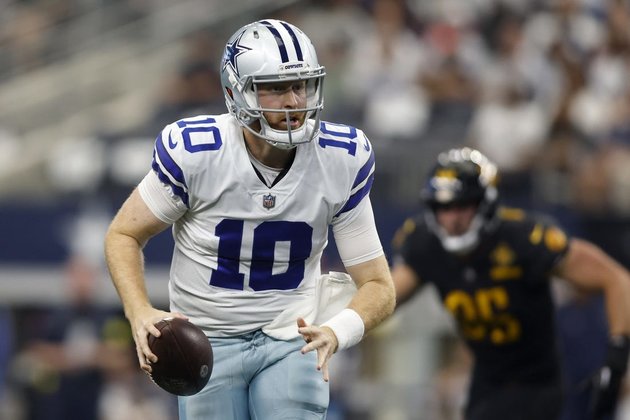 Rush completed 15 of 27 passes for 223 yards and became the first quarterback in Cowboys history to win his first four starts. He played error-free football on a day where neither team gained 300 total yards.

Rush's 30-yard scoring strike to CeeDee Lamb on the first play of the fourth quarter gave Dallas (3-1) the breathing room it needed in what was a tight game for three quarters. Maher added a 29-yard field goal with 3:51 remaining.

Carson Wentz completed 25 of 42 passes for 170 yards with a touchdown and two interceptions for Washington (1-3), which lost its third straight game after a Week 1 win over Jacksonville.

The Commanders went with a conservative game plan, trying to protect Wentz and a shaky offensive line. After giving up nine sacks last week in a 24-8 loss to Philadelphia, Washington stuck with short passes and the running game in order to neutralize the Cowboys' pass rush.

That plan worked for a while, as the Commanders mined a field-position advantage to keep Dallas out of the end zone most of the first half. When Wentz found Jahan Dotson for a 10-yard scoring strike at the 7:05 mark of the second quarter, Washington took a 7-6 edge.

At that point, the Cowboys came up with their best drive of the game. They went 75 yards in 15 plays, using up 6:01. Rush paid it off by hitting Michael Gallup for a 9-yard touchdown pass with 1:04 left in the half.

Maher started the scoring with a 53-yard field goal on the game's first drive and also converted from 45 yards to begin the second quarter. He added a 28-yard field goal at the 4:56 mark of the third quarter.

The Commanders were often their own worst enemy, committing 11 penalties for a whopping 136 yards.