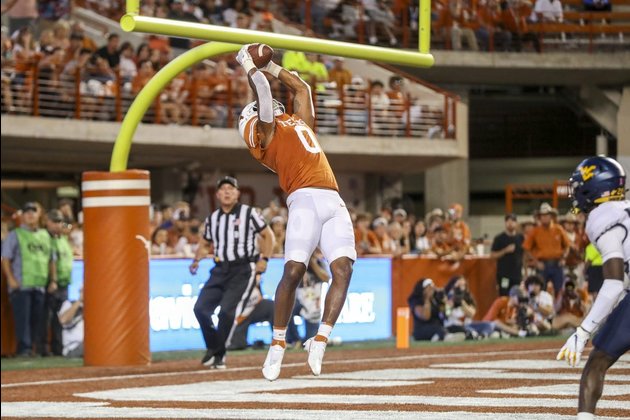 Hudson Card passed for 303 yards and three touchdowns as host Texas ran away in the first half and beat visiting West Virginia 38-20 on Saturday in Big 12 Conference action in Austin, Texas.

Longhorns wideout Xavier Worthy caught seven passes for 119 yards and two touchdowns and passed for another.

Card ended up 21-of-27 passing. Bijan Robinson ran for 101 yards and a TD for the Longhorns.

JT Daniels was 29-of-48 passing for 253 yards and a score in the loss, which snapped West Virginia's two-game win streak.

Mountaineers running back CJ Donaldson Jr. was carted off the field with an apparent head and back injury midway through the third quarter and transported to a nearby hospital.

The Longhorns struck first on a 15-yard TD pass from Card to Worthy at the 6:08 mark of the opening quarter. Worthy then hit a wide-open Ja'Tavion Sanders on a 33-yard scoring pass after a backward pass from Card in the waning seconds of the quarter to go up 14-0.

Robinson scored untouched from the 1-yard line six seconds into the second quarter to boost Texas' lead to 21-0. Sanders then hauled in his second touchdown catch of the game, this one from Card and covering 13 yards, with 4:22 to play in the half.

West Virginia cut its deficit to 28-7 on an 8-yard TD pass from Daniels to Kaden Prather with 13 seconds to play before halftime. The Mountaineers gained 83 of its 163 yards of the half on the scoring drive.

Texas immediately grabbed back the momentum on its opening possession of the third quarter. It culminated in Card's 44-yard TD pass to Worthy that the receiver hauled in after it bounced out of the hands of the Mountaineers' Aubrey Burks.

Tony Mathis capped an 18-play, 65-yard march with a 1-yard touchdown run on the first play of the fourth quarter to bring the Mountaineers to within 35-14. Texas responded with a 48-yard field goal from Bert Auburn with 10:22 to play.

West Virginia capped the scoring with a 4-yard TD run by Justin Johnson Jr. with 4:31 to play.