Will Rogers leads Mississippi St. past Texas AM 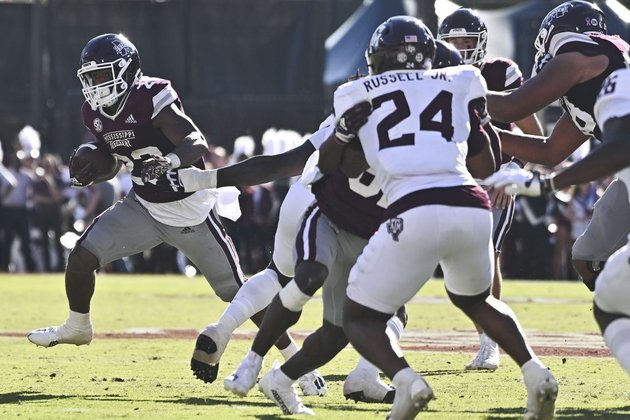 Will Rogers threw for 329 yards and three touchdowns to lead Mississippi State to a 42-24 victory over No. 17 Texas AM on Saturday in Starkville, Miss.

Rogers, who went 31-for-45 passing, threw scoring strikes of 5 and 4 yards in the first half before tossing a 75-yard touchdown pass in the second half.

The Bulldogs also forced four turnovers that led to 14 points.

Dillon Johnson rushed for 68 yards and a score on 14 carries for the Bulldogs (4-1, 1-1 Southeastern Conference). Rara Thomas had five catches for 135 yards and a touchdown and Justin Robinson caught six passes for 50 yards.

After Texas AM pulled to within 14-3 on its first possession of the third quarter, the Bulldogs' defense struck back.

Emmanuel Forbes burst through the line to block Randy Cross' 44-yard field goal attempt, and Decamerion Richardson grabbed the ball and ran 50 yards into the end zone for a 21-3 lead with 5:02 left in the third quarter.

The Aggies pulled to within 21-10 on Max Johnson's 18-yard touchdown pass to Muhammad with 2:35 left in the quarter.

Mississippi State countered with Dillon Johnson's touchdown run on fourth-and-goal from the 1-yard line for a 28-10 lead with 12:42 left in the game.

Backup quarterback Haynes King's 4-yard run pulled the Aggies to within 28-17 with 7:14 remaining, but Rogers needed just one play to throw a 75-yard touchdown pass to Thomas to make it 35-17 just 11 seconds later.

Forbes made it 42-17 when he stepped in front of King's pass and returned it 33 yards for a touchdown with 3:29 left before Texas AM's LJ Johnson Jr. capped the scoring with a 1-yard run with 94 seconds left.

Mississippi State took a 7-0 lead when Rogers threw a 5-yard touchdown pass to Caleb Ducking to cap an 11-play, 94-yard drive with 6:10 left in the second quarter.

After forcing Texas AM to go three-and-out on its ensuing possession, the Bulldogs drove 70 yards in nine plays, with Rogers capping the drive with a 4-yard touchdown pass to Rufus Harvey for a 14-0 advantage.