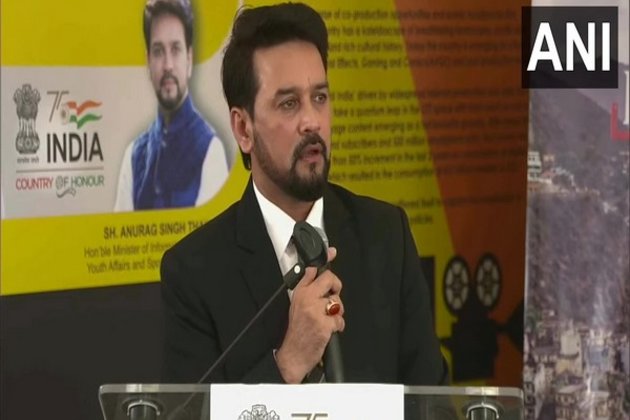 By Payal MehtaCannes [France] (ANI): In a major step to enhance India's stature as an international film-making destination, Union Information and Broadcasting Minister Anurag Thakur on Wednesday announced an incentive scheme for the audio-visual co-production and shooting of foreign films in India with a cash incentive of up to 30 per cent and a cap of USD 260,000.

The Minister made the announcement at the inauguration of the India Pavilion at the 75th Cannes Film Festival.

"I'm delighted to announce today in Cannes an incentive scheme for audio-visual co-production and shooting of foreign films in India with a cash incentive of up to 30% with a cap of USD 260,000," the minister said.

"In the case of foreign films that will be shot in India, an additional bonus with a cap of USD 65,000 for employing 15 per cent or more manpower in India," the minister said.

Prime Minister Narendra Modi had on Tuesday expressed happiness at India's participation as 'Country of Honour' at this year's Cannes Film Festival.

In a message, the Prime Minister had said that India truly possesses immense potential to become the content hub of the world and the government remains steadfast in its efforts towards furthering ease of doing business in the film sector.

He had also said that from facilitating international film co-productions to ensuring single window clearance mechanism for permissions for filming across the country, India offers seamless possibilities to filmmakers of the world.

"Our spellbinding locations, technological prowess in film making and the talent of young men and women provide a perfect backdrop for film makers," PM Modi had said.

Anurag Thakur on Tuesday led the largest-ever Indian official delegation of eleven celebrities walking together on the inaugural event at Cannes Film Festival. Mame Khan became the first ever folk artist to open a Red Carpet for Indian contingent. (ANI)