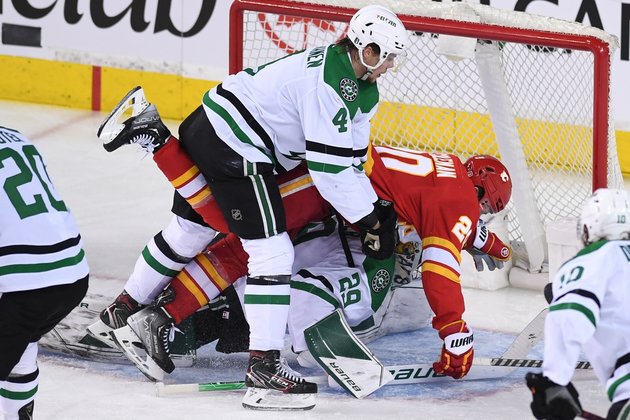 Johnny Gaudreau scored the series-winning overtime goal and the host Calgary Flames claimed a 3-2 victory over the Dallas Stars in Sunday's Game 7 of their Western Conference first-round series.

Tyler Toffoli and Matthew Tkachuk also scored for the Flames, while goaltender Jacob Markstrom made 26 saves in an exhilarating game.

The Flames will face the Edmonton Oilers in the second round of the Stanley Cup playoffs -- the first Battle of Alberta playoff meeting since 1991.

Jamie Benn and Vladislav Namestnikov replied for Dallas, but the star of the show was goalie Jake Oettinger, who made 64 saves, the second-most saves in a Game 7 loss in NHL history. Kelly Hrudey had 73 saves for the New York Islanders against the Washington Capitals in 1987.

The Flames were buzzing all over with one opportunity after another when Gaudreau lifted a sharp-angled top-shelf shot from the left wing for his first playoff overtime goal with 4:51 remaining in the first overtime period.

The Flames twice erased a deficit en route to overtime. Benn converted the game's first shot 40 seconds into the game, his first goal of the series and first in 13 playoff outings, to open the scoring.

The Flames regrouped and were rewarded when Toffoli put them on the board 116 seconds into the second period by deflecting a point shot for his first of the series.

Namestnikov restored the Dallas edge 31 seconds later with a one-timer that completed a three-way passing play off a rush up ice for his first goal of the series.

However, Tkachuk scored just after a power play expired at 8:44 of the period when he took a feed from Gaudreau and ripped a short-side wrist shot into the net for his first of the playoffs.