Texas AM searching for its potential vs. South Carolina 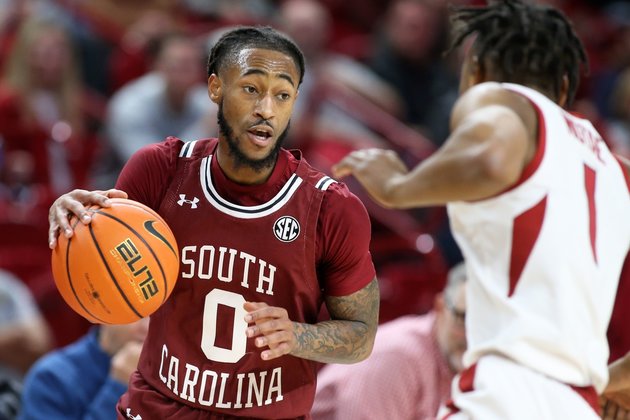 Texas AM will look to end a three-game losing streak that has tarnished a strong start to Southeastern Conference play when it plays host to South Carolina on Saturday in College Station, Texas.

Against LSU, Quenton Jackson came off the bench to score a team-high 20 points for the Aggies, who also got strong performances from Andre Gordon and Tyrece Radford, who scored 18 and 14 points, respectively.

The Aggies were outrebounded 38-30 and made 11 fewer free throws than the Tigers.

South Carolina (12-7, 3-4) has ascended to the middle of the SEC standings after home wins over Georgia and Vanderbilt. The Gamecocks opened league play by dropping four of their first five games, including setbacks to ranked foes Auburn and Tennessee.

"This league is just absurd right now," South Carolina coach Frank Martin said. "It's incredible how hard it is to make a pass, let alone win a game in this league right now. But I'm really proud of our guys. I've told you guys all year, we've got some competitive dudes, and we're still trying to grow as a team."

Against Georgia, South Carolina used a 24-0 run during a second half in which it outscored the Bulldogs 47-24 en route to an 83-66 win on Jan. 22. Four days later, James Reese V had scored 19 points on 8-of-12 shooting and Jermaine Couisnard scored 14 as the Gamecocks pulled away from Vanderbilt for a 70-61 victory by outscoring the Commodores 44-31 in the second half.

Erik Stevenson (11.4 points per game), Reese (10.2) and Couisnard (10.1) are the three Gamecocks who average double figures in scoring. Wildens Leveque averages a team-high 5.5 rebounds to go along with 8.5 points.