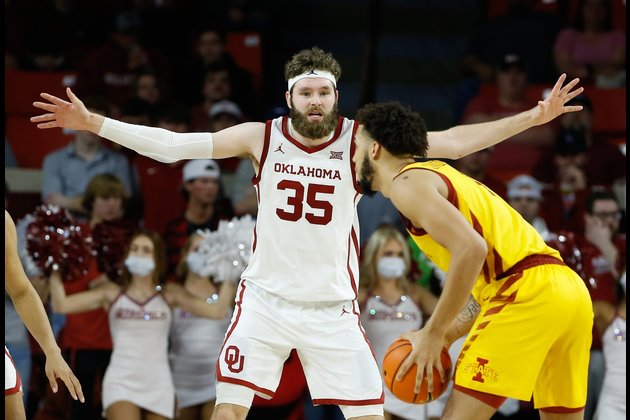 Saturday's game between Oklahoma and TCU in Fort Worth, Texas, is critical for both teams.

Oklahoma is coming off a 66-52 loss to No. 21 Texas on Tuesday night where the Sooners were just 1 of 13 from behind the 3-point line, leading scorer Tanner Groves managed just one field-goal attempt and Porter Moser's team looked generally discombobulated from the start.

The Horned Frogs are looking to keep building momentum after Wednesday's 60-57 win at Kansas State gave TCU its first Big 12 victory of the season.

The Sooners (12-4, 2-2 Big 12) have responded with a win following each of their first three losses this season. Two of those wins came over ranked opponents.

But Moser said his team had to be more aggressive and avoid costly turnovers to keep that trend going.

"We'll dig into that and get better."

TCU (11-2, 1-1) has won eight of its last nine, though Horned Frogs coach Jamie Dixon is far from satisfied.

Dixon's team is leading the nation with 15.3 offensive rebounds per game, helping TCU to 14.9 second-chance points per game.

Lampkin averages 5.8 rebounds per game, second on the team, but 56 percent of those rebounds have come on the offensive end.

Groves has been the Sooners' offensive catalyst all season but he had not only a season low in scoring against Texas with just three points, but also a season-low two rebounds and was held without an assist for the first time this season. He also didn't attempt a 3-pointer for the first time.

Snow storm closes much of Greece, including Athens

ATHENS, Greece: A severe snowstorm that swept across the Mediterranean region has stranded thousands of motorists on a motorway in ...

BRUSSELS, Belgium: A European Union watchdog, the European Court of Auditors (ECA), has warned that the EU faces considerable economic ...

FORT PIERCE, Florida: The U.S. Coast Guard is searching the waters off eastern Florida, with hopes of saving 39 missing ...

BANGKOK, Thailand: In a landmark move, Thailand, on January 25, emerged as the first Asian nation to decriminalize the use ...

TAIPEI, Taiwan: In its largest sortie in 2022, China sent 39 warplanes towards Taiwan on January 24, amidst tensions over ...

PARIS, France: Under the latest COVID-19 rules adopted by the French government, leading tennis player Novak Djokovic could be allowed ...

PALO ALTO, California: Tesla CEO Elon Musk has predicted that the electric carmaker, which reported a record $5.5 billion in ...

NEW YORK, New York - U.S. stocks roared on Friday with all the major indices racking up solid gains. The ...

DETROIT, Michigan: General Motors Co. has announced that it will invest nearly $7 billion in electric vehicle and battery production ...

BENTONVILLE, Arkansas: Walmart will become the first major U.S. retailer to significantly invest in indoor vertical farming, after announcing it ...

SATKHIRA, Bangladesh - The Royal Institute of British Architects (RIBA) has recognized an 80-bed Bangladeshi hospital in the coastal area ...