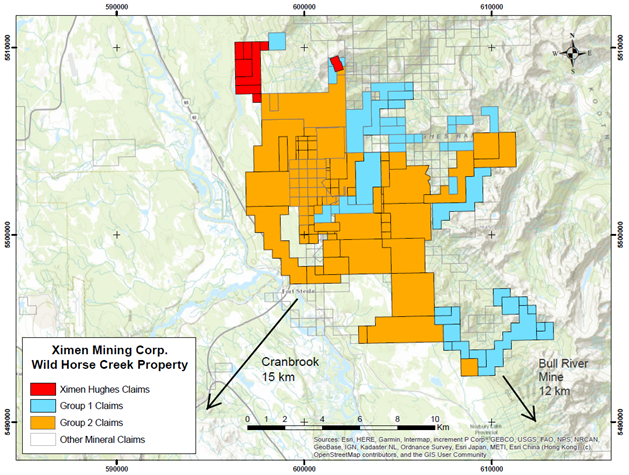 The drilling was done to extend previous drill results from 2016 that tested a gold-breccia zone where previous surface grab sample results ranged up to 8.0 grams per tonne gold. High gold values were intersected in the 2016 drill hole LF16-01, which was drilled at an inclination of 60 degrees and intersected stockwork quartz veinlets and breccia in altered sedimentary rocks. Previous reports indicate a drill intercept of 0.76 grams per tonne gold over 14.4 meters was obtained between depths of 60.0 meters and the end of the hole at 74.4 meters. The hole ended in the mineralized zone.

In 2021 Ximen completed 2 holes for 373.7 meters cored at its Wild Horse Gold property. The first hole (GM21-01) was an extension of the 2016 hole; the hole was deepened from 74 to 217.6 meters. The extension intersected a continuation of the quartz veinlet stockwork and breccia-style mineralization seen in LF16-01, with consistently elevated gold values obtained between 75 and 84 meters, and local elevated gold values further down the hole. The interval from 74 to 84 meters (10.0 meters) returned values ranging between 0.10 and 1.21 grams per tonne gold and averaged 0.42 grams per tonne gold. From 74 to 146 meters (72.0 meters) an average grade of 0.28 grams per tonne gold was obtained.

The second hole drilled in 2021 (GM21-02) was drilled to a depth of 230.1 meters from the same collar location as the previous hole but at a steeper inclination of 71 degrees. This hole did not intersect the quartz stockwork-breccia intersected in the first hole. It encountered a strong fault zone at a depth of 19.2 meters and passed into thick-bedded, calcareous quartzite and quartz grit, interbedded with hematitic quartz grit and quartzite of the Cranbrook Formation. Below 93 meters depth, local centimeter-scale bands of auriferous pyrite mineralization were intersected. The pyrite bands are closely associated with quartz-carbonate veinlets and sericitic alteration, although in places pyrite occurs without any vein quartz. Selected intervals with abundant pyrite were assayed, with elevated results shown in the following table.

Although GM21-02 did not intersect the mineralized quartz breccia/stockwork zone that was intersected in hole GM21-01, it intersected localized mineralization of similar character containing significant gold values. The gold consistently correlates with pyrite, which occurs by itself or is associated with quartz-carbonate veinlets. This mineralization may be the periphery of the main zone. Our interpretation is that the target zone breccia was offset by the strong fault intersected near the top of hole GM21-02.

Re-analysis by the metallic screen method was done for a suite of 31 selected samples with results between 0.30 and 5.43 grams per tonne gold. The metallics screen assays were not significantly different, indicating that coarse gold is not likely present in the selected samples.

Ximen's Wild Horse Gold Property covers potential source areas for the famous Wild Horse Creek placer gold deposits, where gold was first discovered in 1864. More than 10 million ounces of gold is estimated to have been recovered from the streams in the East Kootenay's around Cranbrook and placer gold mining continues to this day. The area is part of the Kimberley Gold Trend, a zone that extends southwestward from the Rocky Mountains into the western part of the Purcell Mountains (Seabrook and Hoy, 2015 Geoscience BC Roundup Poster).

Analyses reported for the 2021 drill core were completed by Activation Laboratories Ltd. (Actlabs) at Kamloops, B.C. Act-Labs is an independent commercial laboratory that is ISO 9001 certified and ISO 17025 accredited. Analyses for gold were by the fire assay method using 30-gram samples with inductively coupled plasma optical emission spectrometry (ICP-OES) finish. Silver and other elements were analyzed by ICP-OES using an aqua regia digestion. Quality control was monitored using reference standards and blank samples inserted into the sample sequence at intervals. Check analyses were performed on selected samples.

On behalf of the Board of Directors,

Ximen Mining Corp. owns 100% interest in three of its precious metal projects located in southern BC. Ximen`s two Gold projects The Amelia Gold Mine and The Brett Epithermal Gold Project. Ximen also owns the Treasure Mountain Silver Project adjacent to the past producing Huldra Silver Mine. Currently, the Treasure Mountain Silver Project is under a option agreement. The option partner is making annual staged cash and stocks payments as well as funding the development of the project. The company has also acquired control of the Kenville Gold mine near Nelson British Columbia which comes with surface and underground rights, buildings and equipment. 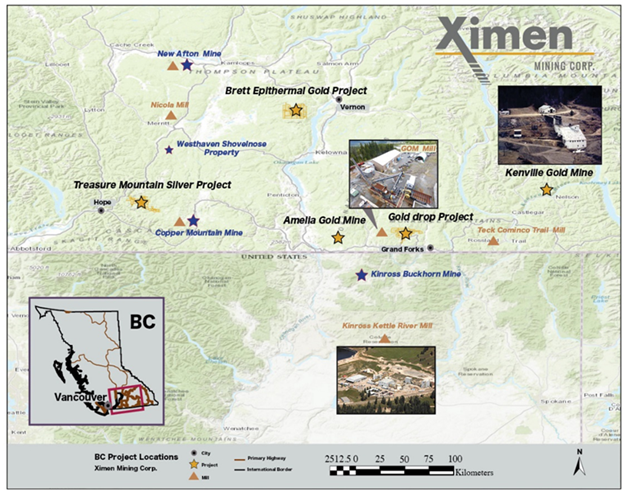 This press release contains certain 'forward-looking statements' within the meaning of Canadian securities This press release contains certain 'forward-looking statements' within the meaning of Canadian securities legislation, including statements regarding the receipt of TSX Venture Exchange approval and the exercise of the Option by Ximen. Although the Company believes that such statements are reasonable, it can give no assurance that such expectations will prove to be correct. Forward-looking statements are statements that are not historical facts; they are generally, but not always, identified by the words 'expects,' 'plans,' 'anticipates,' 'believes,' 'intends,' 'estimates,' 'projects,' 'aims,' 'potential,' 'goal,' 'objective,' 'prospective,' and similar expressions, or that events or conditions 'will,' 'would,' 'may,' 'can,' 'could' or 'should' occur, or are those statements, which, by their nature, refer to future events. The Company cautions that forward-looking statements are based on the beliefs, estimates and opinions of the Company's management on the date the statements are made and they involve a number of risks and uncertainties. Consequently, there can be no assurances that such statements will prove to be accurate and actual results and future events could differ materially from those anticipated in such statements. Except to the extent required by applicable securities laws and the policies of the TSX Venture Exchange, the Company undertakes no obligation to update these forward-looking statements if management's beliefs, estimates or opinions, or other factors, should change. Factors that could cause future results to differ materially from those anticipated in these forward-looking statements include the possibility that the TSX Venture Exchange may not accept the proposed transaction in a timely manner, if at all. The reader is urged to refer to the Company's reports, publicly available through the Canadian Securities Administrators' System for Electronic Document Analysis and Retrieval (SEDAR) at www.sedar.com for a more complete discussion of such risk factors and their potential effects.