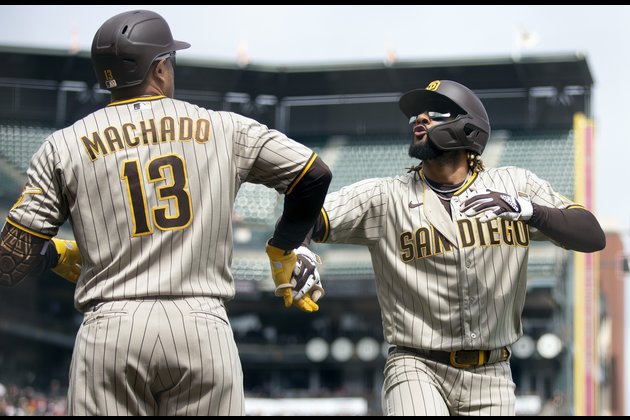 Nabil Crismatt (3-1) threw four shutout innings in a bulk-innings role, helping the Padres (76-70) move within a half-game of the St. Louis Cardinals in the National League wild-card race.

The Padres travel to St. Louis for a three-game showdown beginning on Friday.

A second straight loss resulted in the Giants (95-52) seeing their NL West lead over the Los Angeles Dodgers trimmed to one game.

After a Trent Grisham sacrifice fly in the second and Tatis' solo shot in the third gave the Padres an early 2-0 lead against San Francisco starter Kevin Gausman (14-6), Pham's two-out double scored Jurickson Profar and Adam Frazier to double the advantage in the fifth.

Unbeaten in his previous eight starts, Gausman was pulled after five innings, having allowed four runs and eight hits. He walked one and struck out seven.

Thanks in large part to the longest shutout stint of Crismatt's career, one in which he held San Francisco to three hits over four innings, San Diego carried a 4-0 lead into the sixth before the Giants rallied.

Crismatt pitched the second through fifth innings in relief of opener Pierce Johnson, who threw a scoreless first.

A wild pitch by Austin Adams allowed Kris Bryant to score in the sixth to get San Francisco on the scoreboard, before LaMonte Wade Jr.'s RBI ground-rule double in the seventh closed the gap to 4-2.

But the Padres busted the game open in the eighth when Wil Myers doubled home a run and Machado blooped a two-out single, scoring Grisham and Myers to make it 7-2.

Evan Longoria responded with his 13th homer, a solo shot, in the last of the eighth, but Padres relievers Tim Hill, Emilio Pagan and Mark Melancon protected most of the lead from there. Melancon closed things out despite allowing the game's final run on a wild pitch.

Frazier and Austin Nola had three hits apiece, while Tatis and Pham collected two each for the Padres, who will face the Giants six more times before regular season's end.

Bryant, Wade and Longoria each had two hits for the Giants, who remain home to duel another division leader, the Atlanta Braves, the next three days.

MOSCOW, Russia: The Russian government has issued a statement saying it disagreed with the comments of new Japanese Prime Minister ...

China and Iran court Taliban, while IS aims for chaos

On October 8, a terrible blast struck the worshippers attending Friday noon prayers at the Gozar-e-Sayed Abad Mosque in the ...

BOSTON, Massachusetts: Massachusetts Governor Charlie Baker has announced that he is deploying up to 200 National Guard members to assist ...

ATHENS, Greece: The Greek island of Crete has been hit by a 6.3-magnitude earthquake, just weeks after another quake caused ...

Islamabad Court hears of horrific murder that has shocked the nation

ISLAMABAD, Pakistan - Zahir Jaffer, the son of a billionaire businessman and the prime suspect in Noor Mukadam's murder case, ...

NAYPYITAW, Myanmar - According to locals and sources within the armed resistance movement, the Myanmar military deployed thousands of troops ...

WASHINGTON D.C.: U.S. Secretary of Interior Deborah Haaland has announced that the U.S. government will auction lease agreements for seven ...

DUBLIN, Ireland: Property prices in Ireland are increasing at double digit rates for the first time in a decade.Since August, ...

SYDNEY, NSW, Australia - Buyers swarmed Asian stock markets on Friday, cashing in on a global rush to stocks.Gains in ...

Pirates of the Caribbean: Dead Men Tell No Tales