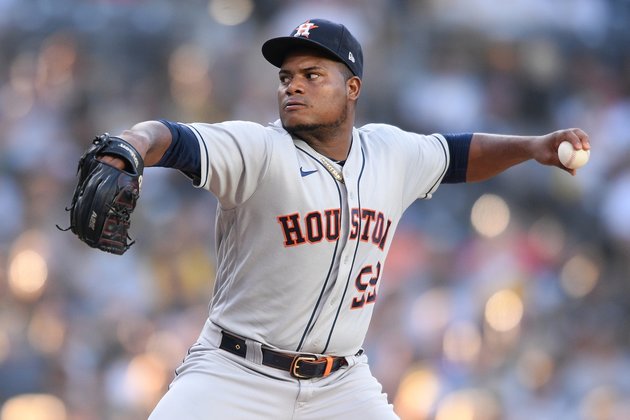 Houston Astros left-hander Framber Valdez was scratched from his start Thursday night against the Texas Rangers with a cut on the index finger of his pitching hand.

Astros rookie RHP Luis Garcia will make the start instead in the series finale in Texas. He opposes Rangers rookie hurler Glenn Otto. The Astros have won two of the first three games.

Astros manager Dusty Baker said the injury occurred when Valdez put his hand on the outfield wall during batting practice. Baker said Valdez might be able to start Friday or Sunday against Arizona.

The Astros entered Thursday's action with a 6 1/2-game lead in the American League West.

Washington: states can order Covid vaccines for kids over 5 years

WASHINGTON D.C.: US health officials have notified states that they can now order doses of COVID-19 vaccines for younger children, ...

INTERNATIONAL SPACE STATION: The International Space Station (ISS) unexpectedly tilted after a faulty test firing of thrusters on a Russian ...

WASHINGTON D.C.: Before granting approval for use in young people, the Food and Drug Administration (FDA) is studying whether Moderna's ...

In Sudan, thousands call for return of military rule

KHARTOUM, Sudan: On Saturday, thousands of pro-military protesters staged a rally in central Khartoum demanding that the government of prime ...

BEIJING, China: Three astronauts from China have arrived at the country's new space station, a major achievement for a national ...

NEW YORK, New York - U.S. stocks were mixed on Thursday with the technology sector forging ahead, while industrials lagged."For ...

BRUSSELS, Belgium: European Union Labor Commissioner Nicolas Schmit has warned that a sharp rise in energy prices could cause greater ...

SYDNEY, NSW, Australia - Stocks in Asia were flat to lower on Thursday as renewed uncertainty about the future of ...

COVID-19 and the unprecedented economic crisis it caused made 2020 one of the most economically challenging years for communities across ...

NEW YORK CITY, New York: Amazon has announced that it will hire 150,000 temporary workers in the United States for ...

Letter From an Unknown Woman