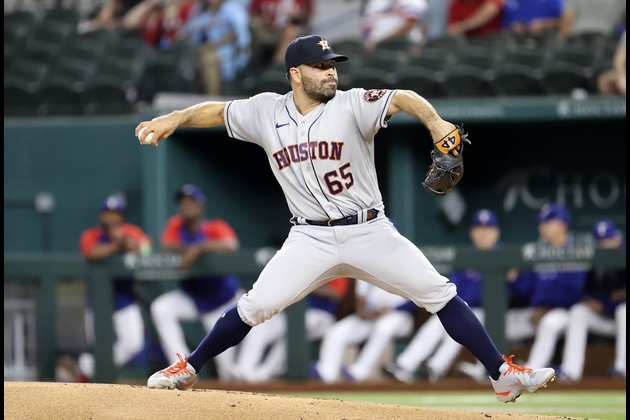 The Houston Astros have a comfortable seven-game lead in the American League West entering their road game Thursday night against the Texas Rangers, and Astros manager Dusty Baker should be buoyed by the performance of right-hander Jose Urquidy with the playoffs approaching.

With Urquidy producing his longest start since June 23 on Wednesday, the Astros cruised to a 7-2 victory that took some pressure off their overworked bullpen.

Urquidy allowed one run on two hits and one walk with six strikeouts over six innings and resembled the pitcher who routinely provided the Astros depth before he spent two months on the injured list with shoulder soreness.

Aside from right-hander Lance McCullers Jr., Astros starters have struggled to consistently work deep into games. That fact combined with the attempted strategy to manage innings largely out of necessity has put Baker in a precarious position in recent days.

"His command, and he maintained his velocity throughout the whole game," Baker said when asked what impressed him most about Urquidy's performance Wednesday. "It showed that his arm strength is coming back. He had a very good changeup, and his slider was good. Overall a very good performance, but I was most impressed that he was able to maintain his velocity.

"I was impressed with the fact he went six innings. This is what we needed to get our bullpen straight."

Left-hander Framber Valdez (10-5, 3.26 ERA) will start the series finale for the Astros (85-60) on Thursday. He earned the win Friday in his most recent start despite laboring for five innings, allowing five runs (four earned) on six hits and five walks with six strikeouts in a 10-5 victory over the Los Angeles Angels.

Rookie right-hander Glenn Otto (0-1, 6.92) will be the scheduled starter for Texas (54-91) in the season series finale on Thursday. Otto suffered his loss in his previous start after allowing eight runs on eight hits and one walk with five strikeouts over 3 1/3 innings in the Rangers' 10-5 setback at Oakland last Friday.

He had allowed two runs on six hits and one walk with 11 strikeouts over his first two career starts, including five shutout innings against the Astros in his debut on Aug. 27. A Houston native, Otto allowed two hits with no walks and seven strikeouts against his hometown team.

One bright spot for the Rangers on Wednesday was the return of Willie Calhoun, who was activated from the 60-day injured list and finished 2-for-4 with a double and a run scored. Calhoun had not appeared in a game for the Rangers since June 26, when he suffered a left-forearm fracture when he was hit by a pitch.

"That was the silver lining of the day," Rangers manager Chris Woodward said. "I know we got beat, but it's nice to see Willie get a couple hits there, especially the way that last ball came off his bat to left-center. It's a good thing moving forward."

Washington: states can order Covid vaccines for kids over 5 years

WASHINGTON D.C.: US health officials have notified states that they can now order doses of COVID-19 vaccines for younger children, ...

INTERNATIONAL SPACE STATION: The International Space Station (ISS) unexpectedly tilted after a faulty test firing of thrusters on a Russian ...

WASHINGTON D.C.: Before granting approval for use in young people, the Food and Drug Administration (FDA) is studying whether Moderna's ...

In Sudan, thousands call for return of military rule

KHARTOUM, Sudan: On Saturday, thousands of pro-military protesters staged a rally in central Khartoum demanding that the government of prime ...

BEIJING, China: Three astronauts from China have arrived at the country's new space station, a major achievement for a national ...

NEW YORK, New York - U.S. stocks were mixed on Thursday with the technology sector forging ahead, while industrials lagged."For ...

BRUSSELS, Belgium: European Union Labor Commissioner Nicolas Schmit has warned that a sharp rise in energy prices could cause greater ...

SYDNEY, NSW, Australia - Stocks in Asia were flat to lower on Thursday as renewed uncertainty about the future of ...

COVID-19 and the unprecedented economic crisis it caused made 2020 one of the most economically challenging years for communities across ...

NEW YORK CITY, New York: Amazon has announced that it will hire 150,000 temporary workers in the United States for ...

The Night of the Hunter

Night of the Hunter