Mariners slip by Rays in bottom of ninth 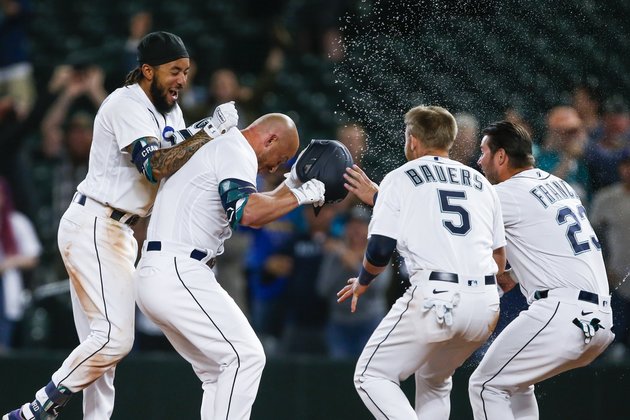 Pinch hitter Kyle Seager's single brought home the winning run with one out in the bottom of the ninth inning as the Seattle Mariners rallied to defeat the visiting Tampa Bay Rays 6-5 Thursday night in the opener of a four-game series.

With Seattle trailing 5-4, Dylan Moore led off by walking on four straight pitches from Rays right-hander Pete Fairbanks (1-2). Jake Bauers then grounded a single to center.

After Luis Torrens popped up an attempted sacrifice bunt, Shed Long Jr. lined a run-scoring double into the left-field corner to tie it at 5-5. Seager then hit a hard grounder through the right side of the drawn-in infield to win it.

Mariners left-hander Hector Santiago (1-1) struck out the side in the top of the ninth to get his first victory since 2019.

Torrens and Ty France homered for the Mariners and Randy Arozarena went deep for the Rays.

Seattle took a 1-0 lead in the third inning as Long led off with a double to right field, moved to third on a sacrifice bunt and scored on J.P. Crawford's single to center.

Arozarena gave the Rays the lead in the top of the fourth, hitting a two-run homer to left after Ji-Man Choi led off with a single.

The Rays made it 3-1 in the fifth as Brett Phillips drew a two-out walk from right-hander Rafael Montero, stole second and scored on Brandon Lowe's single to left.

Torrens hit a solo homer in the bottom of the inning to pull the Mariners within 3-2.

The Rays added two more runs in the sixth after Arozarena led off with a single. The Mariners brought in left-hander Anthony Misiewicz to face Austin Meadows, who doubled to right. Joey Wendle hit a sacrifice fly to center to score Arozarena and send Meadows to third. With two outs, Kevin Kiermaier hit a chopper off the plate that turned into a run-scoring infield single to make it 5-2.

The Mariners got those two runs back in the bottom of the inning as Mitch Haniger led off with a line-drive single to left and France followed with a two-run homer.