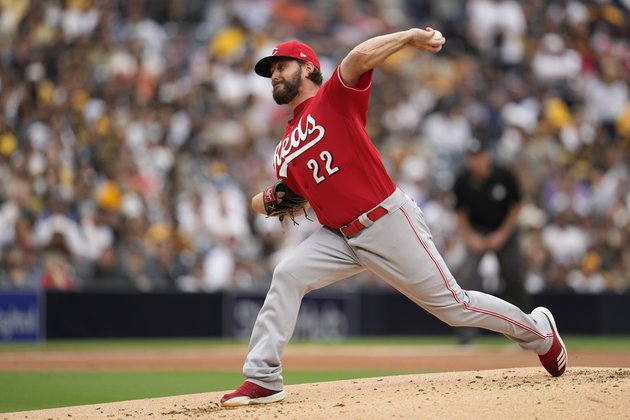 Victor Caratini capped a wild ninth inning Thursday night with a two-run, walk-off homer off Reds left-hander Amir Garrett to give the San Diego Padres a 6-4 win over the Cincinnati Reds.

Moments earlier, Eric Hosmer tied the game at 4 with a two-run homer off reliever Ryan Hendrix with one out in the bottom of the ninth after the Reds had scored four times off Padres' closer Mark Melancon in the top of the ninth to erase San Diego's 2-0 lead.

Manny Machado drew a four-pitch walk off Hendrix to open the ninth, and after Wil Myers struck out, Hosmer crushed his sixth home run of the season, barely fair down the right-field line.

Garrett came on and allowed a single to Jake Cronenworth before Caratini, a switch-hitter batting right-handed, launched his fifth homer of the season into the left-field seats.

The Padres snapped a three-game losing streak with just their fourth win in the last 18 games. The Reds saw their six-game winning streak come to an end.

Rookie Jonathan India capped the Reds' four-run ninth with a two-run homer off Melancon. It came just after another rookie, pinch-hitter Tyler Stephenson, tied the game with a single.

The Padres had taken a 2-0 lead into the ninth on solo homers by Fernando Tatis Jr. and Manny Machado off Reds left-hander Wade Miley, who was working on his second no-hitter of the season before Tatis homered to also break up a scoreless tie with two-out in the sixth.

Joey Votto singled to open the ninth for the Reds against Melancon, who entered the inning looking for his 20th save and had allowed only two earned runs in 28 1/3 innings covering 27 appearances.

Catcher Tucker Barnhart doubled to right with one out, putting the tying runs in scoring position. Votto scored on a ground out and Stephenson tied the game with a two-out single to center.

India then drove the first pitch he saw from Melancon into the left field stands for his sixth homer of the season.

Pierce Johnson (2-2) picked up the win after following Melancon and getting the final out in the top of the ninth. Garrett (0-2) took the loss.

Padres starter Joe Musgrove, who also pitched a no-hitter this season -- the first in Padres history on April 9 at Texas -- gave up four hits and three walks with two strikeouts in seven scoreless innings.

Tatis' homer, a high drive over the fence in center, was his 22nd of the season, tying him for tops in the majors with Vladimir Guerrero Jr. of Toronto. He has homered in three straight games and five of his last six games. Machado's homer led off the seventh inning and was his 10th of the season.

Miley, who threw the first no-hitter of his career against Cleveland on May 7, had allowed only three homers in 61 2/3 innings going into the game. He retired 17 of the first 19 Padres he faced and allowed four hits and two walks with five strikeouts in seven-plus innings.

Thursday's opener to a 10-game homestand marked the first time since 2019 that Petco Park was open to a capacity crowd. The "Re-Opening" drew a sellout crowd of 40,362.