VANCOUVER, BC / ACCESSWIRE / June 14, 2021 / Infield Minerals Corp. (TSXV:INFD) ('Infield' or the 'Company') is pleased to announce it has outlined an area of anomalous silver and gold in soil geochemistry at the Company's 100% owned Desperado project in Nevada. The Company intends to further advance the property through follow-up surface work in Q3-Q4 2021.

The Desperado property is located in Nye County within the Ellendale mining district, 40 kilometres east of the town of Tonopah. It covers an area of 1,410 hectares (3,480 acres) surrounding the historical Ellendale mine property owned by a third party and is readily accessed by a series of local dirt roads connected to Highway 6 two kilometres north of the property (Figure 1).

Exploration and mining in the district during the early 1900s are evidenced by several abandoned adits, shafts and trenches. The district remains underexplored with no indication of modern exploration work having been conducted within the property area during at least the past 30 years. At the Desperado property, historical workings and mineralization are associated with large areas of clay alteration. Much of the area is overlain by 'desert gravel' with few outcropping rocks, providing opportunities for discovery under cover through exploration techniques such as soil sampling and geophysical surveying.

In 2020, the Company identified large areas of hydrothermal clay alteration within the Desperado property through a specialized interpretation of satellite spectral data. During a field inspection, 60 clay altered rock samples were collected from the alteration areas and subsequently analysed using a Terraspec Spectrometer to evaluate the nature of alteration. The minerals identified in the study were consistent with low-sulfidation and high-sulfidation clay alteration in epithermal systems.

In April 2021, Infield carried out a systematic soil sampling program across an extensive zone of hydrothermal clay alteration. The survey included 710 samples on a grid mesh of 100 x 100 meters, covering an area of approximately 4 kilometres by 3 kilometers. The B soil horizon was sampled when present and the C soil horizon was sampled when it was not possible to sample the B horizon. A robust Quality Assurance/Quality Control protocol was implemented, including insertion of standards, blanks and duplicates that were taken from the same sampling pits. All samples were delivered to the ALS geochemistry laboratory in Elko, Nevada, for preparation. The samples were then analyzed at ALS laboratories in North Vancouver, British Columbia, for 53 elements (ALS code ME-MS41L). ALS preparation and analytical laboratories are independent and have ISO/IEC 17065 and 17025 accreditations from both ANSI and SCC. 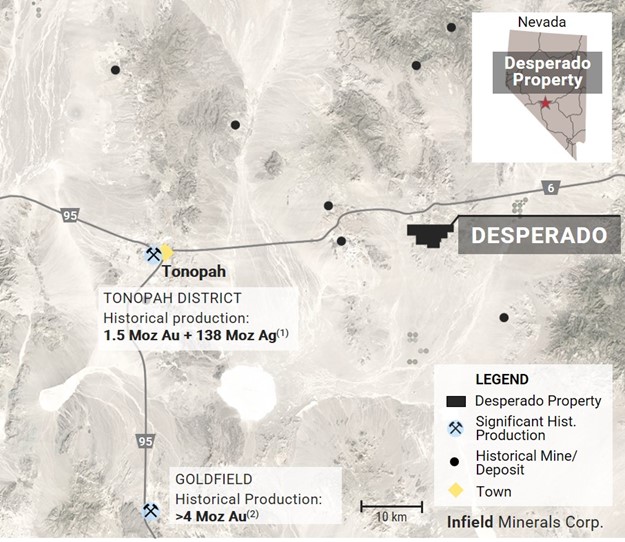 A silver-gold target area has been outlined at the Desperado property utilizing soil geochemistry. The soil survey results indicate that anomalous silver in soil is distributed over an area of 3.5 kilometres in length by 500 to 800 metres in width (Figure 2). Anomalous values for gold in soil over the same area are erratic, which can be expected due to the poor mobility of the element (Figure 3). Two additional elements of interest, arsenic and manganese, that are generally associated with silver mineralization in the Tonopah region, were also found in relation to the anomalous silver area (Figure 3).

Infield plans to follow up with additional fieldwork at Desperado during Q3-Q4 2021 with the intent to advance the property toward a drill ready status. The program will include field evaluation of the silver-gold target area to determine the prospects of mechanical trenching, as well as to propose the layout of a grid for ground geophysical surveying. 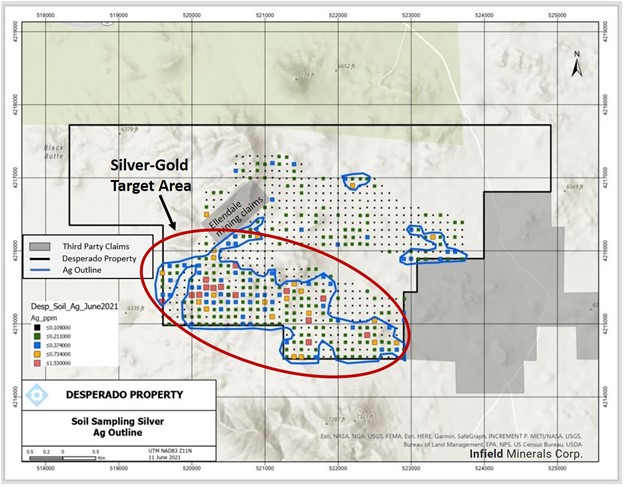 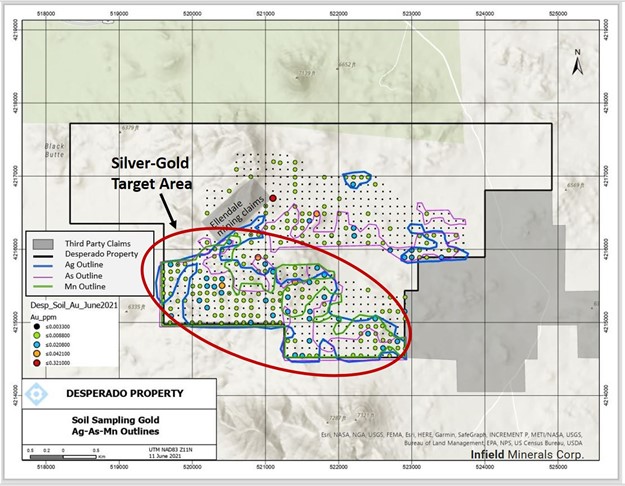 Infield's 2021 drilling campaign at the M1 property in Nevada consists of approximately 4,000 metres of reverse circulation ('RC') drilling, of which 1,920 metres has been completed in the South zone of the property across six drill holes. Several structural zones of quartz veining and associated alteration were intersected during initial drilling, however, geochemical analysis of the RC chip samples did not return significant results. The recent data will be utilized where applicable to revise interpretations of geophysical signatures for improved drill hole targeting during the second phase of the campaign.

'Infield is fully-funded for our 2021 exploration campaign and we look forward to further advancing the Company's portfolio of prospective gold-silver projects in Nevada. The Company has come a long way in one short year since inception, including establishing a strong technical and broader team, consolidating three quality projects into Infield's portfolio, and recently going public on the TSX Venture Exchange. We would like to thank our shareholders for their continued support,' stated Evandra Nakano, President and CEO of Infield.

Technical information in this news release has been reviewed and approved by Richard Dufresne, P.Geo., Vice-President Exploration for Infield Minerals Corp. and a Qualified Person for the purposes of National Instrument 43-101.

For more information, please contact Evandra Nakano, the CEO, President and a director of the Company, at +1 (604) 220-4691 or email: info@infieldminerals.com.

On Behalf of the Board of Directors of Infield Minerals Corp.

Infield Minerals is currently exploring for high-grade gold and silver in mining-friendly Nevada. Our mission is to grow the company through discovery, acquisitions and sustainable development of high quality, high potential assets. Founded in 2020, Infield is led by a team of mining entrepreneurs with extensive technical and resource evaluation experience.