Canex Intersects 1.6 g/t Gold Over 35.1 Metres Including 8.2 g/tT Gold Over 4.6 Metres at the Excelsior Mine, Gold Range Project, Arizona

Dr. Shane Ebert, President of the Company stated, 'We are delighted to see the initial drill results from the Excelsior zone return very strong gold grades with the zone remaining open in all directions. These grades and widths highlight the potential of the Gold Range property and the success our team is having targeting and defining zones of near surface, oxidized, bulk tonnage style gold mineralization. Drilling to date has confirmed a 3 kilometre long mineralized target zone extending from the Eldorado to the Excelsior areas, and this target is gold bearing in every place we have drill tested it so far, suggesting sizable gold resource potential. We are currently planning additional surface exploration work on the recently acquired Excelsior Mine Property to further refine drill targets along the mineralized trend with a goal of resuming drill testing as soon as a drill is available'.

Holes GR21-38 and 39 were both drilled from the same pad located 50 metres back from holes GR21-35, 36, and 37. Both holes ended in mineralization and stopped short of the main Excelsior Vein. These holes will be deepened or re-drilled in future programs. Holes GR21-38 and 39 intersected large zones of anomalous gold with hole GR21-28 returning 1.2 g/t gold over 18.3 metres.

These first holes into the Excelsior zone demonstrate good continuity of mineralization and show strong grades within a 30 to 40 metre wide mineralized zone that has a moderate dipping geometry favorable for an open pit target. Hole GR21-37 demonstrates a considerable high grade component to the system, and supports systematic drill testing of the target down dip and along strike. 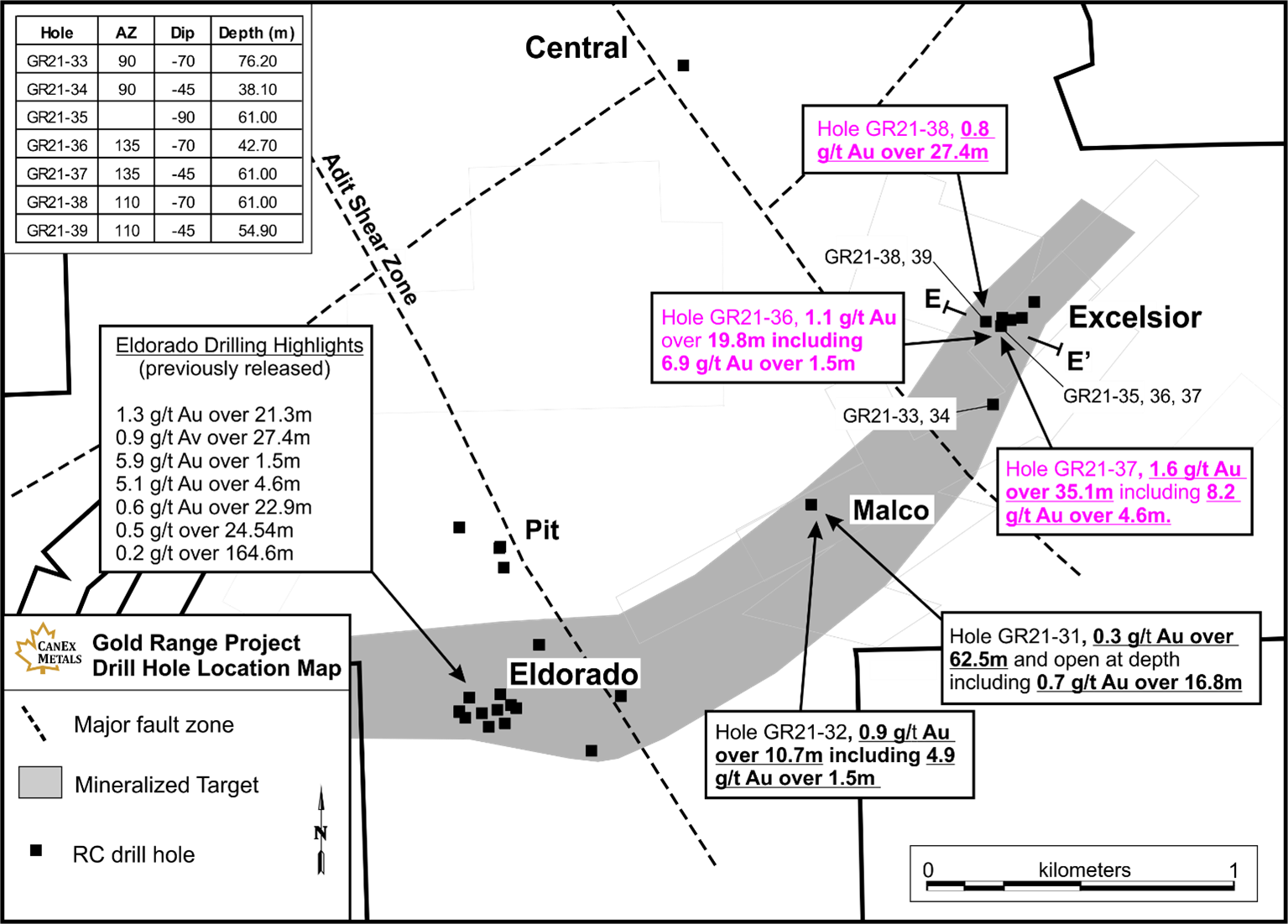 Figure 1. Gold Range Property showing drill holes in this release and the location of cross section E - E' at the historic Excelsior Mine. 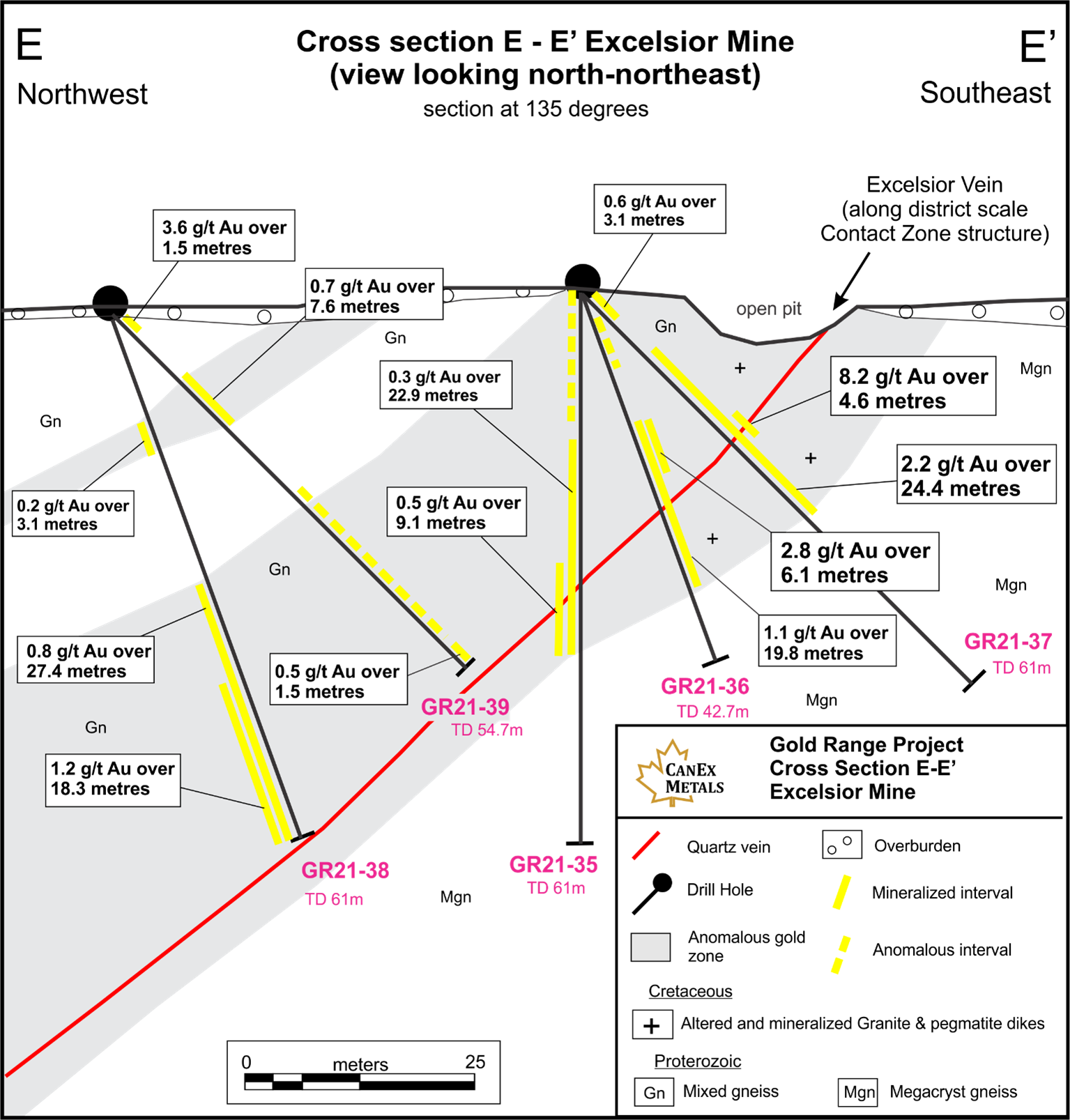 Figure 2. Cross section E - E' through the Excelsior Mine.

In early 2021 the Company successfully completed 34 reverse circulation drill holes across 2.5 kilometres of strike length along the southern portion of the Gold Range Property. In total 2357.6 metres were drilled in holes ranging from 38 to 137 metres deep. Fifteen holes were drilled at the Eldorado Zone to test and expand the Company's previously announced bulk tonnage oxide discovery, 5 holes tested various targets across the southern part of the property and 14 holes tested the Excelsior Mine area.

To date 25 holes from the 2021 drill program have been received and released and results for an additional 9 drill holes are pending and will be released as they are received, compiled, and interpreted.

Reverse circulation drill cuttings were collected in numbered cloth sample bags from 5 foot (1.52m) intervals during drilling and were picked up from site and analyzed by Skyline Assayers and Laboratories in Tucson, Arizona (which is ISO/IEC 17025 accredited). A 1000g pulp was prepared and gold was assayed using a 50g fire assay with an atomic absorption finish (method FA-01-50g). Gold samples greater than 5 g/t are redone using a 50g fire assay method with a gravimetric finish (method FA-02 50g). Twenty-four additional elements were analyzed using a multi acid digestion and inductively coupled plasma (method TE-4). The Company included certified reference standards, blanks, and duplicates in every sample batch and then checked to ensure proper quality assurance and quality control.

CANEX Metals (TSX.V:CANX) is a Canadian junior exploration company focused on advancing its Gold Range Project in Northern Arizona. Led by an experienced management team, which has made three notable porphyry and bulk tonnage discoveries in North America, CANEX has identified and tested several targets which host the potential for bulk tonnage oxide gold mineralization at its Gold Range Project. Recent drilling has identified near surface bulk tonnage gold potential at the Eldorado Zone with Hole GR21-25 returning 1.3 g/t gold over 21.3 metres including 5.1 g/t gold over 4.5 metres . The new discovery correlates with a strong gold in soil anomaly and sheeted quartz veinlets and stockworks within metamorphic rocks. The recent addition of the Excelsior Mine Property has added an additional 2 kilometres of strike along a 3 kilometre long highly prospective mineralized trend that extends from the Company's Eldorado discovery to the historic Excelsior Mine. The Excelsior Mine has seen historic underground and open pit mining along a zone 200 metres long and open along strike. Gold mineralization is centered along the shallow dipping high grade Excelsior Vein which is surrounded by a halo of sheeted quartz and quartz carbonate veins 20 to 50 metres wide.

The Company remains focused on testing and advancing key exploration targets on the Gold Range Property through continued exploration and drilling.

Dr. Shane Ebert P.Geo., is the Qualified Person for CANEX Metals and has approved the technical disclosure contained in this news release.

Except for the historical and present factual information contained herein, the matters set forth in this news release, including words such as 'expects', 'projects', 'plans', 'anticipates' and similar expressions, are forward-looking information that represents management of CANEX Metals Inc. internal projections, expectations or beliefs concerning, among other things, future operating results and various components thereof or the economic performance of CANEX. The projections, estimates and beliefs contained in such forward-looking statements necessarily involve known and unknown risks and uncertainties, which may cause CANEX's actual performance and financial results in future periods to differ materially from any projections of future performance or results expressed or implied by such forward-looking statements. These risks and uncertainties include, among other things, those described in CANEX's filings with the Canadian securities authorities. Accordingly, holders of CANEX shares and potential investors are cautioned that events or circumstances could cause results to differ materially from those predicted. CANEX disclaims any responsibility to update these forward-looking statements.