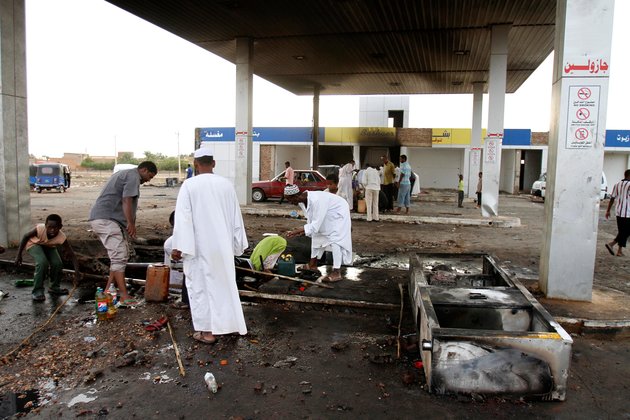 KHARTOUM - People in Sudan's cities are protesting after the ministry of energy on Tuesday doubled the price of fuel to help reduce a budget deficit. The price of fuel in Sudan has jumped four times in two years and helped spark mass protests that in 2019 led to the ouster of former president Omar al-Bashir.

Sudan's transitional government raised the price of fuel on Tuesday, to help trim a budget deficit and bring an end to fuel shortages.

Smugglers were taking advantage of low prices to purchase fuel in Sudan and sell it at a higher price in neighboring countries.

Minister of Energy Khariy Abdelrahman said we hope this decision will result in the hoped-for results by creating fuel abundance and stop the smuggling.

The price of fuel in Sudan has now jumped four times in two years. One price hike triggered the mass protests that in 2019 led to the ouster of former president Omar al-Bashir.

But thousands rallied in Khartoum on Thursday to protest the new prices and call for the government to retract the increase.

Alaa Gassim is one of the protesters who blocked two main bridges Wednesday night in Khartoum.

Gassim says increasing the fuel prices adds trouble to people's lives. He says he wishes this step was preceded by consideration of individuals' monthly income. People should take a strong stand against this pricing and totally reject it, he adds.

Protester Abduelkarim Hassan, who stopped his car in on the Fitihab Bridge Wednesday, seems determined to make the government back down.

Hassan says he was one of the anti-Bashir protesters and hoped for change. He says he will participate in protests and all resisting campaigns until the transitional government backs off on its decision or increases salaries or leaves.

Economic analysts like Professor Mohamed Al-Nayer think the decision is unfortunate and avoidable in the current time.

Mohamed says the decision is indeed unfortunate and the economic situation in Sudan isn't ready for such decision. He says it is possible to take such a step if economic stabilization was accomplished, with stabilizing the exchange rates and decreasing inflation rates.

The U.S. has agreed to remove Sudan from its list of state sponsors of terrorism, a move that should give Sudan access to international loans and create new ties with countries and investors.

The government is hoping that move will boost the economy, which has struggled for years under the weight of political isolation and U.S. sanctions.

Year's long blockade against Qatar may be nearing end

U.S. prosecutors are discussing a deal with lawyers for Huawei finance chief Meng Wanzhou to resolve criminal charges against her, ...

Antonio Marcos Diniz was only 13 years old when his family was forced to leave their home near Brazil's Atlantic ...

United States in bid to beef up relationships in Western Hemisphere

This year is on track to be one of the three hottest on record, completing a run of six years ...

NEW YORK, New York - U.S. stocks were on the rise on Friday, despite disappointing jobs data which showed the ...

Irish economy grew in third quarter at fastest rate ever

The United States added 245,000 jobs in November, the fewest since April and the latest sign that hiring has slowed ...

SYDNEY, NSW, Australia - Stocks in Asia continued to meander on Friday, while demand for the U.S. dollar continued to ...