Cowboys' hopes vs. Eagles may ride on 3rd-string QB 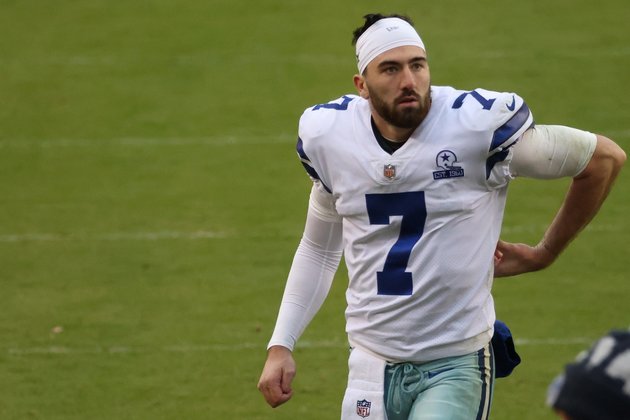 Former Pennsylvania prep star Ben DiNucci returns to the Keystone State on Sunday night and could make his first start as quarterback of the Dallas Cowboys.

Following injuries to Dak Prescott and now Andy Dalton, the 2020 seventh-round draft pick may be pressed into action when the Cowboys (2-5)face the rival Philadelphia Eagles (2-4-1) in a fight for first place in the NFC East.

"If you would have told me a year ago that this is where I was going to be in a year, I think I would say, 'No way.' You'd have to pinch me," the 23-year-old rookie said after replacing Dalton in Sunday's 25-3 loss in Washington. "But here we are. It's 2020. No one really knows what to expect the next day, let alone a week down the road."

Where he will be Sunday is back in Pennsylvania, where in 2014 he became the first player in state history to throw for 4,000 yards in a season at Pine-Richland High School in suburban Pittsburgh. He led his team to a state title and was named Pennsylvania's Gatorade Player of the Year.

He nearly went to college in Philadelphia, committing to Penn before switching to Pitt. After three seasons with the Panthers, DiNucci transferred to James Madison, an FCS program in Harrisonburg, Va., and passed for 3,441 yards with 29 touchdowns and six interceptions in 2019.

The Cowboys selected him with the 231st overall pick, the 11th quarterback off the board.

"Ben's been up here relentlessly in the last 48 hours. He's pouring everything he personally can into this opportunity that may be in front of him," coach Mike McCarthy said Wednesday. "He'll get pretty much all the work this week because I don't see Andy coming back (until) at the end of the week at the earliest."

The division-leading Eagles, well-rested after a 22-21 win against the Giants last Thursday night, do not have much tape to study on DiNucci, especially without a preseason this year. He completed 2 of 3 passes for 39 yards and was sacked three times against Washington after Dalton left with a concussion.

"We were watching some of his college film, just getting a feel for him more as an athlete and some of the throws that he made and things like that," Eagles defensive coordinator Jim Schwartz said. "Anybody that makes an NFL team is good enough to play, so I think you start there. That's going to get your respect right away."

Philly ranks tied for fourth in the NFL with 3.4 sacks per game and will test the Cowboys' injury-ravaged offensive line by threatening to apply heavy pressure on DiNucci, whose backup is journeyman Garrett Gilbert (six career pass attempts since 2014). Defensive end Brandon Graham is tied for third in the league with six sacks.

"We're always up for the Cowboys, really doesn't matter who is out there at quarterback," Schwartz said. "We'll be ready to go."

Protests in France to block use of Covid health pass

PARIS, France: Thousands of people in Paris and other French cities protested against the introduction of a mandatory COVID-19 health ...

BERLIN, Germany: China and India missed a U.N. deadline to submit new plans detailing how they will reduce greenhouse gas ...

TUNIS, Tunisia: Some 394 migrants were rescued from an overcrowded wooden boat in the Mediterranean Sea on Sunday.The Sea-Watch 3 ...

U.K.'s Channel 4 in discussions for sale to American Discovery Channel

SYDNEY, NSW, Australia - Stocks in Asia were mixed on Wednesday with Japan's indices losing ground, while Australia rose to ...

PARIS, France: The French auto market is not rebounding as quickly as hoped for, with blame being placed on the ...

Zoom to pay $85 mln due to sharing data, 'Zoombombing'

SAN JOSE, California: Zoom Video Communications has agreed to pay $85 million, along with improving its security, as a settlement ...

NEW YORK, New York - Wall Street bounded ahead on Tuesday with solid gains being recorded by all the major ...

San Francisco, California: Even as restaurants struggled to survive during the Covid lockdown in California, many fear they will not ...