Meet the Next Hollywood and Music Star - Chris Goma

If there's one person who can do it all, it's Chris Goma. At the age of 25, Goma is already making a name for himself in Hollywood and in the media world.

LOS ANGELES, CA / ACCESSWIRE / August 8, 2020 / Chris Goma can play numerous instruments, engineer his own beats and produce a wide variety of different musical flows. But his talent doesn't stop there, he can also write amazing screenplays. 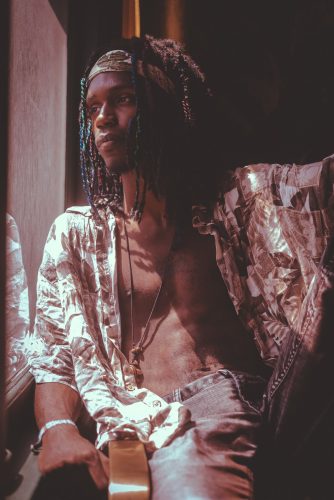 Born on January 27th, 1995, Goma derives from the roots of Rwandan music. Unlike most others, Chris Goma was brought into this world to become a star. Coming from a very talented and musical family, it is no surprise that Goma found himself pursuing a music career. Dedicated and driven by his passion to create, Goma continues to rise to the top of the music world.

Goma is one of the most authentic artists because his mind is always flowing with new ideas, helping him find new ways to express himself. Not only does this make him an amazing catch, but his vibrant personality makes it easy for others to connect with him.

'When it comes to work related things, passion-related projects, I get kind of obsessive about them until I know what to do. My brain will keep spinning on a topic until I do it correctly,' said Goma.

Ever since a young age, Goma always envisioned his place in Hollywood. Even at the age of 11, Goma had the dream of becoming an actor. Now, at the age of 25, that dream is more than a reality. Goma is set to debut into his newly found Hollywood career in a new screenplay written by himself; White Lotus, a TV show that will soon be airing.

Growing up, Goma was constantly moving around. From being born in Boston, Massachusetts, to being raised in Toronto, Canada, he was able to experience and understand many unique groups of people and places. Around the age of 14, Goma began writing songs, opening a door for him to share the knowledge he gained from the diverse world he was fortunate enough to experience. The first song he wrote, 'People Talking', can be streamed on both YouTube and Soundcloud.

'Traveling has helped me learn more about others, and then internalizing that and relating to it, within myself instead of the other way around, I feel like a lot of other artists do that. I personally feel like it's a lot harder to connect with people when you make something from just your perspective,' said Goma.

With such unique experiences, comes the creation of music beyond sound, giving Goma a head start in the music world that most only dream of. His colorful personality allows him to have astounding abilities that are accompanied by such profound aspirations.

'I'm hypersensitive to the people now, what they want to do in the world and how messed up it is. I want to contribute to a better situation. I remember back in the day, I met someone named Shawn Bender. He was a poker player. He asked me what I wanted to do, what I wanted to achieve, what my ultimate goal was. I was a kid, I said, ‘I want a billion dollars'. He responded saying, ‘To touch a billion dollars, you've gotta touch a billion lives'. When I heard that, that kind of changed everything, how i thought about things, and I realized some of the goals I had didn't really have anything to do with that. I just started digging deeper,' said Goma, reflecting on a turning point in his life.

In terms of the future, Goma is breaking into yet another industry. Despite the curve balls Coronavirus threw at Goma and many others, he designed a new technological innovation to help himself, other artists and influencers showcase their talents.

'I'm working on a platform, like an app, that would be sort of like an Instagram, something for online events where people can sell virtual tickets, ' said Goma, referring to one of his latest projects.

Goma's personality, talents and outlook on life are very rare and inspiring. Meeting an artist with innumerable capabilities and such zeal, only happens once in a lifetime. Record labels and entertainment companies should act fast; this marvel is bound to be snatched-up within minutes.

WASHINGTON, D.C.: According to a Pentagon report, if China continues with its current nuclear buildup pace, it could have a ...

William, Kate plan US trip in bid to tamp down royal controversies

LONDON, England: Prince William and his wife Kate, the new Prince and Princess of Wales, will travel to the U.S. ...

SYDNEY, Australia: For the first time in eight years, Australia lowered its terrorism threat level from "probable" to "possible," due ...

TRENTON, New Jersey: As part of a project to prevent major wildfires in a federally protected New Jersey forest, up ...

VIENNA, Austria: During a 24-hour strike by Austrian rail workers held this week over issues related to pay, rail traffic ...

Apple returns to Twitter after Musk meeting with Tim Cook

WASHINGTON D.C.: According to U.S. rail company Amtrak, its ridership has nearly returned to pre-COVID-19 levels, rising by more than ...

TOKYO, Japan: The results of a survey released this week showed that Japan's manufacturing activity contracted for the first time ...

ATLANTA, Georgia: As companies look to rein in costs and trim their headcount to brace for an economic slowdown, CNN's ...