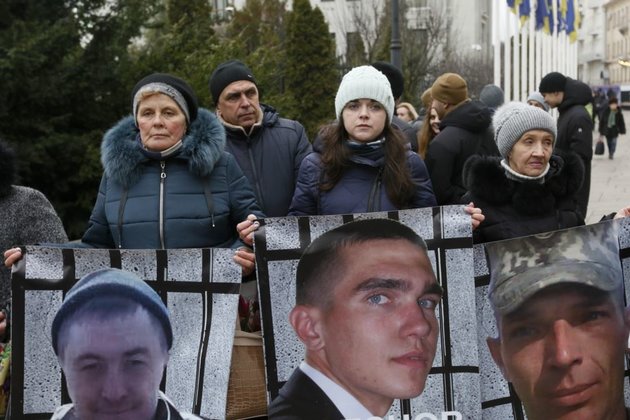 Ukraine and Russian-backed separatists in the east of the country have agreed to another prisoner swap ahead of Orthodox Easter celebrations.

The Russian and Ukrainian sides in the so-called Trilateral Contact Group (TCG) made the announcement late on April 8 following a video conference.

The talks led to 'fundamental agreements on the lists for the mutual release of detained persons' no later than Orthodox Easter on April 19, according to a statement on Ukrainian President Volodymyr Zelenskiy's website.

Russia's envoy to the TCG, Boris Gryzlov, said Kyiv and separatists in the Donbas region had 'principally coordinated the lists of detained persons for exchange.'

It was not immediately clear how many prisoners the two sides would exchange.

During the video conference, held in keeping with recommendations against in-person gatherings because of the coronavirus pandemic, the sides also discussed demining and negotiations on the disengagement of troops in the Donbas region.

Negotiations for a new cease-fire between Kyiv and the separatists have so far failed to halt fighting.

The prisoner swap comes as UN Secretary-General Antonio Guterres in March called on the warring parties in conflicts around the world to halt fighting due to the coronavirus pandemic.

With reporting by dpa and TASS

MINNEAPOLIS, Minnesota - A white police officer in the U.S. city of Minneapolis seen kneeling on the neck of a ...

Africa, then Asia to be invaded by locusts, says United Nations

NAIROBI, Kenya, May 29 (Xinhua) -- The Horn of Africa region will experience another swarm of locust invasion in June ...

Russia's most prominent conman left wave of death and deception

This is the story of how the mastermind behind MMM, Russia's biggest financial pyramid scheme, managed to get elected to ...

BEIJING, China May 29 (Xinhua) - A spokesperson for China's Ministry of National Defense on Friday criticized a report recently ...

TEHRAN (Tasnim) - The Atomic Energy Organization of Iran (AEOI) dismissed as "a futile attempt" the U.S.' new decision to ...

HANGZHOU, May 29 (Xinhua) -- AliExpress, a global online retail marketplace and part of Alibaba Group, announced on Thursday that ...

SYDNEY, NSW, Australia - Stocks in Asia skidded on Friday, and the U.S. dollar dived, as the relationship between the ...

PHENOM PENH, Cambodia - Scientists and environmentalists are urging an international moratorium on deep-sea mining after releasing a report indicating ...