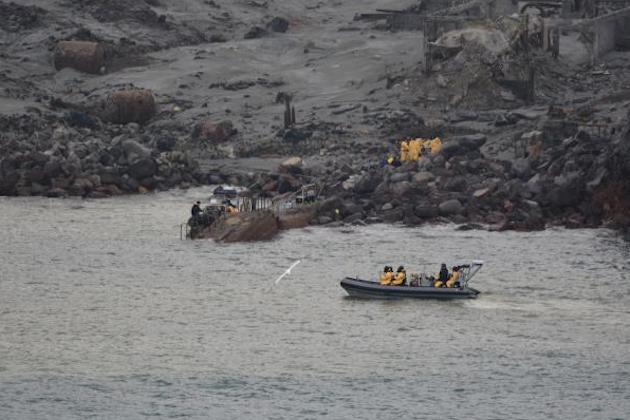 AUCKLAND, New Zealand - New Zealand Defence Force and police officers successfully recovered six bodies from Whakaari/White Island on Friday, 5 days after the volcano on the island erupted, shooting ash, rocks and toxic gas over 47 tourists on tours to the island.

"Unfortunately the recovery option is not over as two people remain unaccounted for. We know at least one body is in the water and divers on the Police launch Deodar are currently attempting to recover this body," New Zealand Police Commissioner Mike Bush said in a statement Friday.

"We are making every effort to locate and recover the two remaining deceased."

"This has been a harrowing event for the Whakatane community and those family and friends directly impacted by the eruption of Whakaari/White Island on Monday," the commissioner said.

"The operation today went to plan and we would like to recognise our partners at NZDF who have provided the specialist skills and resources to help us deliver this part of the operation."

"The operation was not without risk but thanks to sound planning and the skills of the specialist team involved we have recovered the six bodies," Bush explained.

"The environment the recovery team faced today was highly unpredictable and challenging. They showed absolute courage and commitment to ensure we can offer some closure to the families and friends of those who have lost loved ones."

Of the six bodies recovered for there was some confusion as to whether five or 6 were of Australians that were killed in the tragedy. There is the possibility a New Zealand tour guide was among the 6. Making it difficult for authorities is that the bodies, as with some of the injured victims, have been burnt beyond recognition,

"An internationally-approved process for disaster victim identification is being followed. This process is stringent, and it does take time, but we cannot get it wrong," New Zealand's Chief Coroner, Judge Deborah Marshall, said Friday.

"The six bodies of those who've sadly passed, that have been retrieved today, will be transported to Auckland for the post-mortem process," she said.

The official death toll as of Friday remained at ten.

Those officially missing are:

Those unaccounted for are:

Those that have survived are:

Senate approves impeachment rules after being rebuked by chief justice

OUAGADOUGOU, Burkino Faso - (ANI/Sputnik): Thirty-six civilians were killed on Monday in an attack on a market in Sanmatenga province, ...

WHO: Coronavirus could spread to other countries "in coming days"

GENEVA, Switzerland - The World Health Organization (WHO) says the novel coronavirus could spread to other countries "in the coming ...

NEW YORK, New York - Fox News has doubled down on the impeachment of President Donald Trump, with its top ...

SYDNEY, Australia - Stocks in Asia rebounded on Wednesday, clawing back some of the extensive losses of a day earlier.The ...

NEW DELHI, India: At least five flights were diverted from the Delhi Airport due to bad weather on Wednesday morning."Five ...

AUSTIN, TEXAS - With China poised to increase purchases of U.S. agricultural goods this year as part of a Phase ...

DUBLIN, Ireland - Apple has been recognised as one of the greatest foreign direct investors in Ireland.The company on Monday ...

BEIJING, China - There are currently eleven nuclear power units under construction in China, the largest number of nuclear power ...