Economy in a bad shape but BJP carries on with its agenda: Scindia 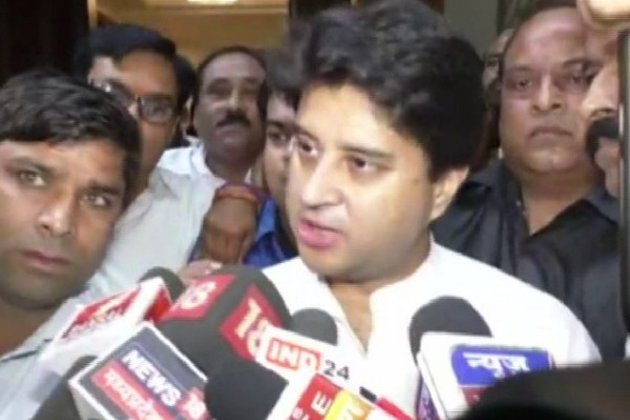 Indore (Madhya Pradesh) [India], Sept 15 (ANI): Senior Congress leader and former MP Jyotiraditya Scindia on Sunday launched an attack on Bharatiya Janata Party (BJP), stating that the party's ideology is to carry on with its agenda even if the country reels under economic slowdown.

Speaking to media persons here on Sunday, Scindia said: "The BJP's ideology is to keep the country in a state of economic slowdown, and at the same time keep working on its agenda.

Scindia also compared the UPA government's economic record with the current Modi government, stating that the average GDP growth rate was 6.7 per cent during the ten years of UPA rule.

"Under 10 years of the UPA government, there was an average of 6.7 per cent of GDP growth rate. In the past six quarters, however, we are witnessing that every record is being broken in terms of economic decline," he said.

"The current government is unable to arrest the economic slowdown. On one side, there is Inspector Raj. People are being thrown into jail. On the other, we are unable to control the economic situation. It is a cause of worry," Scindia added.

Scindia's remarks come at a time when the opposition continues to attack the government over the prevailing economic slowdown in the country.

In a bid to arrest the current slowdown, Finance Minister Nirmala Sitharaman on Saturday announced the government's third set of measures to revive the economy with a renewed focus on exports and realty sector. (ANI)

Bans for over 60s and children during pandemic under scrutiny

A small number of countries around the world have used age as a barrier in setting guidance for their response ...

Officials say that seven civilians have been killed and six others wounded in a roadside bomb attack in northern Afghanistan.The ...

Tensions between U.S. black communities and police go back centuries

Outrage over racial profiling and the killing of African Americans by police officer ...

WASHINGTON, DC - Under siege in the White House, President Donald Trump is aggravating America's latest racial anguish in a ...

SYDNEY, Australia - Stocks in Asia made strident gains on Wednesday, although on the Chinese mainland the advance was limited.The ...

MUMBAI, India - Saregama India on Wednesday announced a global deal with Facebook to license its music for video and ...

NEW YORK, New York - Stocks in the United States, and across the world were in demand again on Tuesday, ...

Chinese solid waste imports down by nearly 50% this year

BEIJING, June 2 (Xinhua) -- China is now moving closer and vows to achieve its goal of halting all imports ...

CO CORK, Ireland - A U.S. manufacturer of essential oils, health and wellness products is developing a manufacturing plant near ...