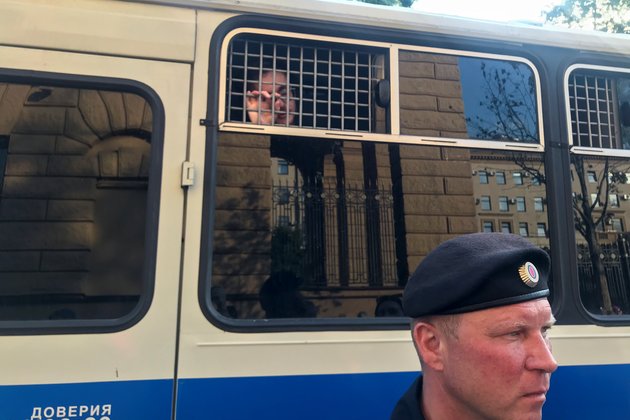 VOA's Fatima Tlis contributed to this story from Washington.

A Russian journalist who has been pursued by Russian police since last November following a radio commentary on a bombing said she was stunned to find out that authorities have added her to the official list of "terrorists and extremists."

In a telephone interview with the Voice of America from her home in Pskov in western Russia, Svetlana Prokopieva, 39, said she discovered last Thursday that Russia's Federal Financial Monitoring Service (Rosfinmonitoring) has blocked her bank account and put her name on its list of "active terrorists."

She said she believes the decision was made in retaliation for her blaming Russia's repressive policies for an incident in October 2018 when a teenager detonated explosives outside the Federal Security Service (FSB) in the city of Arkhangelsk.

"I have no access to my money, and they have taken my travel passport so I can't leave Russia," Prokopieva told VOA, adding that authorities since February have also confiscated her laptop, cellphone and other personal belongings.

"I know if they take this case to the court, the verdict will most likely be guilty. Over here in Russia, there is no such thing as an independent judicial system. Here you feel trapped and doomed," she told VOA.

Working as a freelancer for Radio Free Europe with occasional contributions to BBC Russian Service and local media such as Moscow-based Echo Moskvy radio station, Prokopieva reported on freedom of expression in Russia and the country's military intervention in Ukraine.

Authorities began a criminal probe after her column about the Arkhangelsk blast was published in November 2018 on the Pskovskaya Lenta Novostei website and its audio version was broadcasted on Echo Moskvy.

"A young citizen who has only seen prohibitions and punishments from the government in his life has not been able to invent any other means of communication," wrote Prokopieva in her reaction column to Zhlobitsky's attack.

She told VOA her article was an attempt to tell Russian authorities that repressive policies were the root causes of radicalization.

"Nobody wants such horrible incidents to become a norm, so I proposed that the law enforcement and authorities stop for a moment and think about it," she added.

Russia's communications watchdog Roskomnadzor in December reportedly fined both media outlets and ordered the removal of the column and the audio piece for bearing elements of "propaganda for terrorism."

Russian authorities in recent years have introduced extensive counterterrorism provisions, citing an increase in terror activities. In April 2018, the country broadened its anti-terror law to include actions against those accused of "inciting or justifying terrorism or terrorism propaganda."

Rights organizations, however, charge that officials in the Kremlin use the measures as a justification to repress opposition voices by often portraying journalists and human rights defenders as terrorists.

Johann Bihr, the head of Reporters Without Borders' Eastern Europe and Central Asia desk, told VOA that Russian authorities are increasingly using those counterterrorism measures to silence outspoken journalists, particularly those who cover Russia's policies toward Chechnya, Crimea and Ukraine. He said some 95 people were sentenced on terrorism charges in 2018.

"We fear that this signals an increasing use of this list to stigmatize, discredit and intimidate outspoken journalists," Bihr told VOA.

Bihr added that the pressure on independent media in Russia has grown steadily since the anti-government protests in 2011 and 2012. He said murders and physical attacks against journalists go unpunished while the economic base of independent media outlets is systematically undermined.

"While most TV channels inundate viewers with propaganda, a number of independent media continue to deliver high-quality, hard-hitting reporting, but they are confined to an ever-narrower niche. As soon as they manage to reach a significant public, they are quickly curbed," Bihr told VOA.

The series of protests, also referred to as the Snow Revolution, began in 2011 following reports claiming the Russian election process was flawed. The protests later turned into riots, resulting in the arrest of more than 1,000 people and the injury of dozens of others.

Victor Oleynik, a Russian journalist who is exiled to the U.S., told VOA the increased pressure on freedom of speech has left outspoken journalists to either stay quiet or leave the country. Oleynik fled Russia in 2018 after reporting about violent groups who were suspected of being paid by the Russian authorities to attack protesters.

"Svetlana's case is a politically motivated case which represents one of the types of repression in Russia," he said, speaking of Prokopieva's terror designation.

"I see it as a mechanism to scare people, because your life in Russia is ruined after you make it to this list. From Kremlin's point of view, these kind of measures should serve as a lesson for others," he added.

Prokopieva is expected to appear in court for her trial in September 2019. If found guilty, she could face up to seven years in prison or 1.5 million roubles in fines.

She told VOA she was unsure if her money and confiscated equipment will be returned to her before her trial.

"The people who are tasked with 'investigating' my case have access to my medical information. They know well that I have a health condition requiring a continued purchase of a very expensive medication. With my bank account blocked, I have no other means to getting money and I do not know how I can continue buying my medications," she said.